Sailing Right out of my Comfort Zone! 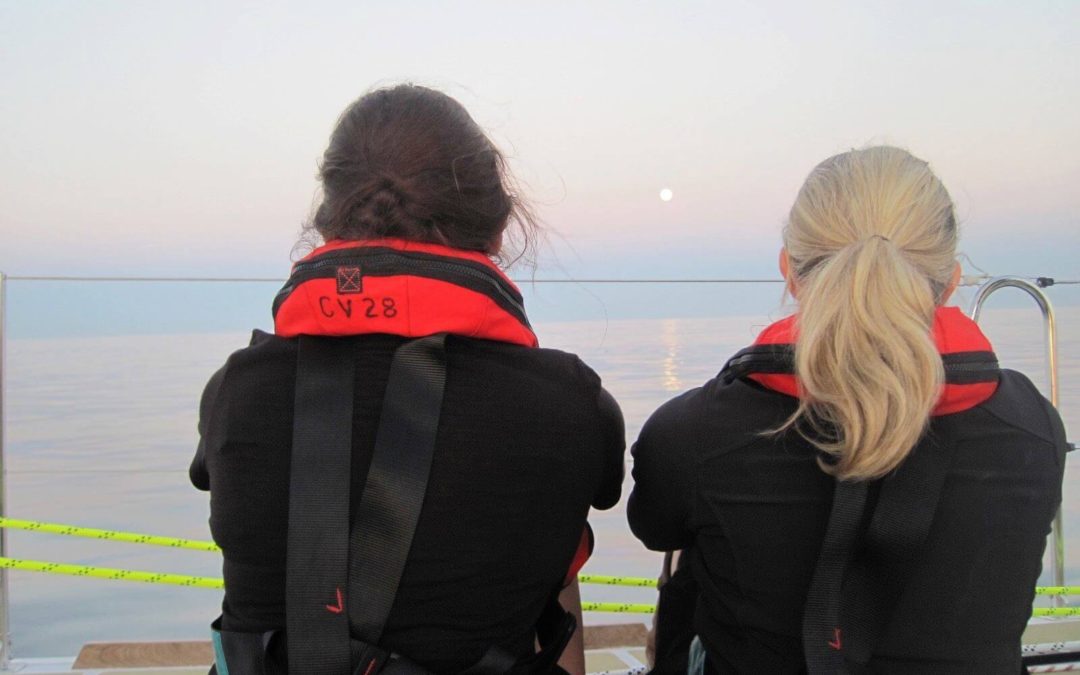 First blog on my new shiny website and I can’t help but feel the pressure to write the right thing! But what is the right thing? Who knows, I sure don’t! And so instead I’m putting up this blog that I recently wrote for She Went Wild to take the pressure off! I’m feeling those familiar feelings of excitement and trepidation as I step out of my comfort zone and launch my very own business Oodles of Freedom, so I guess it kind of fits!

On with the story!

It was January 2014 and I was sat on the bow of a boat with the sun beating down on me, having my first introduction to Sikaflex!  For those not familiar with Sikaflex it’s the nautical equivalent of duct tape, if it’s leaking bung a bit of Sikaflex in! On this occasion Grace and I were refitting a stanchion post, one of the vertical posts that support the guard wires which run around the edge of the boat. Well actually, let’s be honest here, Grace was refitting a stanchion post. I was attempting to help whilst inadvertently transferring the Sikaflex from the tube to my hands, to my legs, my bare feet, my face and my hair!

And whilst we were doing this we were chatting. Grace, already a hardened sailor and mighty handy with a tube of Sikaflex, was recounting her experience of her last month, sailing from Albany to Brisbane, with a Sydney to Hobart race thrown in for good measure. Being far from a hardened sailor, I was lapping it up, asking lots of questions. Trying to get in as many last minute tips as possible, before leaving for my first month at sea.

And then came Grace’s question to me ‘so how are you feeling?’, at which point I promptly burst into tears! I was due to start my first sailing race in two days time, sailing from Brisbane to Singapore as a crew member on a 70ft yacht. To say I was feeling nervous would have been a little bit of an understatement!

Now I’m not normally super emotional (though I have been known to have my moment!) but impromptu crying outbursts had been happening alarming regularly over the week or so I had been in Brisbane with my boyfriend Mark.  I would be happily drinking a coffee, talking about something completely un-sailing related and suddenly the tears would well up, or lying in bed ready to sleep and the thoughts would start again and fear would set in.

All the excitement that had been building since I had signed up for the Clipper Race a few years earlier had gone and in its place my fear had risen to epic proportions! The kind of epic proportions that caused me to cry involuntarily, not cool!

So how did I end up here?

I can remember the moment my sailing adventure began, whilst away with friends for a yurt weekend for my 29th birthday I was panicking about the next year’s big birthday and not having achieved enough in my life to be 30. Along with a whole lot of other ‘helpful’ suggestions from my friends, my friend Ben suggested I sail around the world. I laughed, it felt so completely unachievable for me that I didn’t really consider it, and the conversation moved onto other ideas. Still somehow, a few days later I found myself on Clipper’s website ordering a brochure! After all what harm could it do to find out more?!

Said glossy brochure soon arrived. As I looked at the action packed photos and read the Mark Twain quote ‘Twenty years from now you will be more disappointed by the things you didn’t do than by the ones you did do’ I had a sinking feeling. ‘Oh shit’ I thought ‘I’ve got to do this’! Maybe not the reaction you would expect when embarking on a big adventure, but I had an undercurrent of fear running alongside the excitement and anticipation. This was going to be so far outside of my comfort zone!

So I proceeded through the next steps ignoring the bits that scared me, like an ostrich burying its head in the sand! Not telling my parents I was doing the race until I had a contract, concerned they might try and talk me out of it.  Not watching a DVD from Clipper in case it had scary bits in it! Whenever I talked about the race with my housemates Jess and Charlotte we would talk only of champagne sailing and dolphins, because that’s what it was all going to be like!

However as my first week of training snuck up on me, my excitement to fear balance tipped over and the fear I had been ignoring bubbled up. Cue nights of disturbed sleep and more conversations with Jess and Charlotte where I panicked about everything that could conceivably go wrong and they reminded me about the champagne sailing and dolphins! 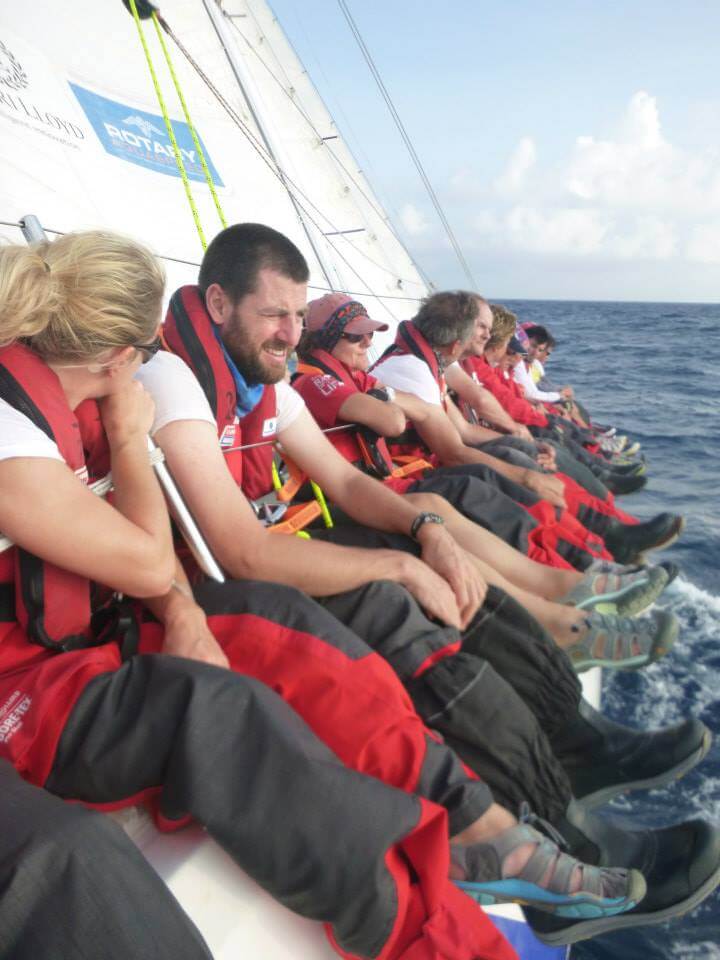 Turns out they were right!

My first week of training came and went. I didn’t crash the boat, I wasn’t unteachable, I didn’t fall overboard and the food I made whilst on mother watch wasn’t inedible (though I did make some porridge that was very close to it!). All of the things I had been dwelling on didn’t eventuate and there was even a bit of champagne sailing though sadly no dolphins!

This cycle repeated itself, as my second and then my third training week approached. In the run up to the training I would feel so uncomfortable and unqualified for the challenge I was taking on that my nerves would get the better of me. But then as soon as I got onboard each time I would settle into it, enjoying and embracing the actual challenges rather than those I had dwelt upon. By the end of each week I would be buzzing with excitement and adding another bit of the race to my contract, already looking forward to my next training or the actual race!

And that trip sailing out of Brisbane that I had been so busy crying about?

I loved it! It was full of gorgeous sunrises and sunsets, laughter, and inane and philosophical conversations with my fellow crew. I discovered a love of helming that saw me jumping on the helm whenever I got the chance, and a bigger love of dolphins which would see me handing over the helming as quickly as possible as soon as they came to say hello!

6 months and nearly 20,000 nautical miles later as my final race came around, a short hop from Den Helder in The Netherlands to London, I was so blasé it barely seemed worth putting my sailing kit on! Ironic considering a few days sailing crossing the English Channel was a prospect that would have terrified me a few years earlier.  I did of course put on my sailing kit, I had learnt a bit of sailing knowledge along the way, as well as massively expanding my comfort zone!

I’m now super happy to have a regular spot crewing on races around Sydney Harbour and to have the privilege of chatting to people thinking of taking on the Clipper Race themselves, sharing in their excitement, fear and anticipation and supporting them as they step outside of their comfort zone. And I’m even more happy to report that I don’t burst into tears before every day’s sailing! It just goes to show where taking small steps towards big adventures and doing things that scare you can lead! 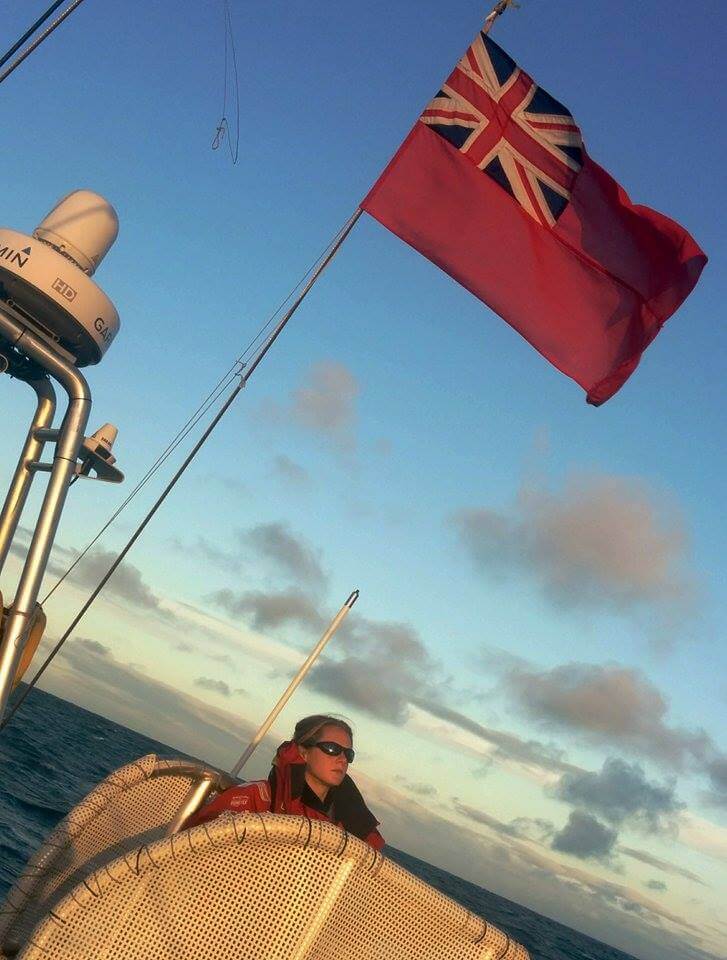