Living my very own #vanlife! 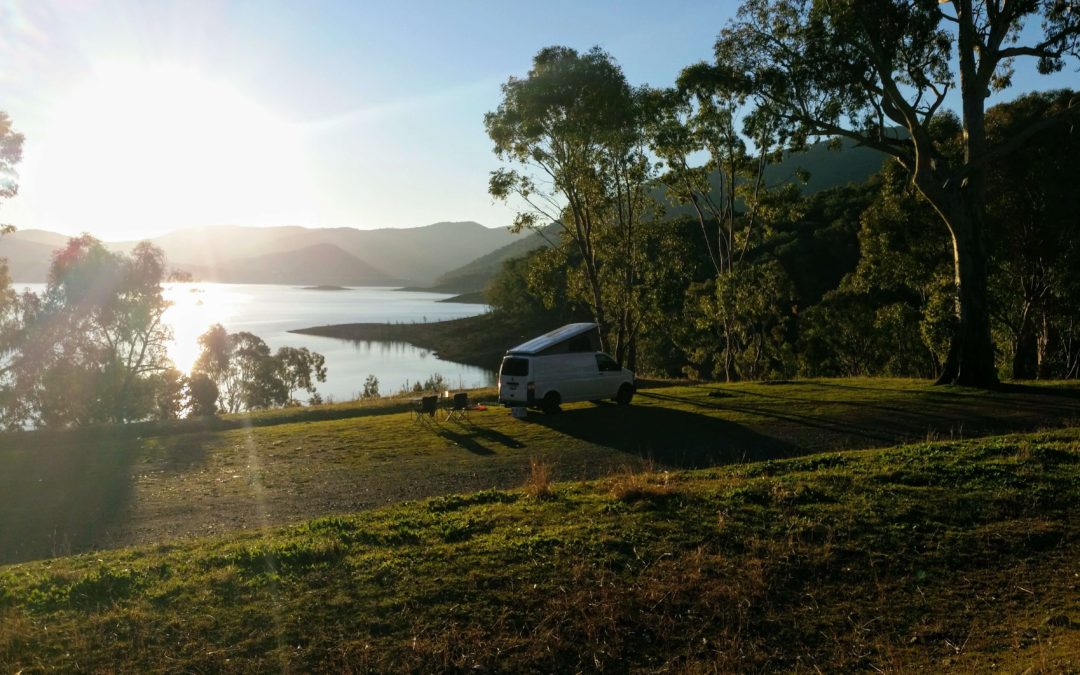 My love affair with vans began one Easter uni holidays at Barnstaple train station carpark! After a long wait, my friends finally arrived in Paul’s van to pick me up and so a week of surfing and trips out in the van followed. I was hooked!

Through the uni years, Paul’s van popped up more than once, trips to the sea, a fun road trip to France and an unforgettable trip to the coast one New Year’s day. In later years Karen’s van took over with well-deserved and much-needed escapes from London to North Devon and an awesome couple of weeks in Portugal (deserted beaches, great waves and cheap food and drink, winner!) 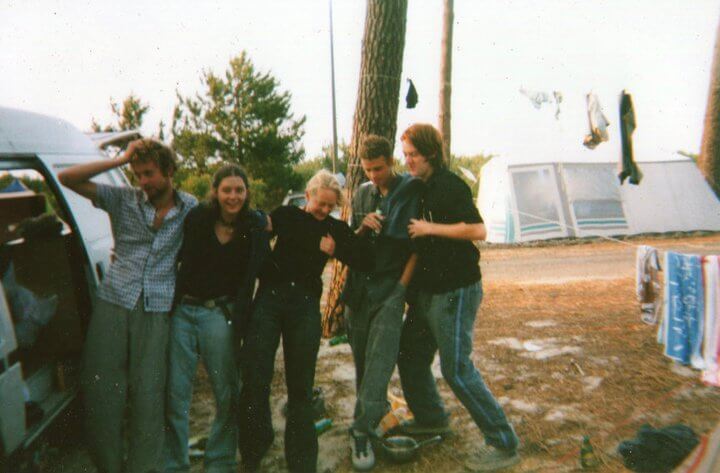 Roadtripping in France. The retroness of this photo demonstrates how long I have wanted a van for! 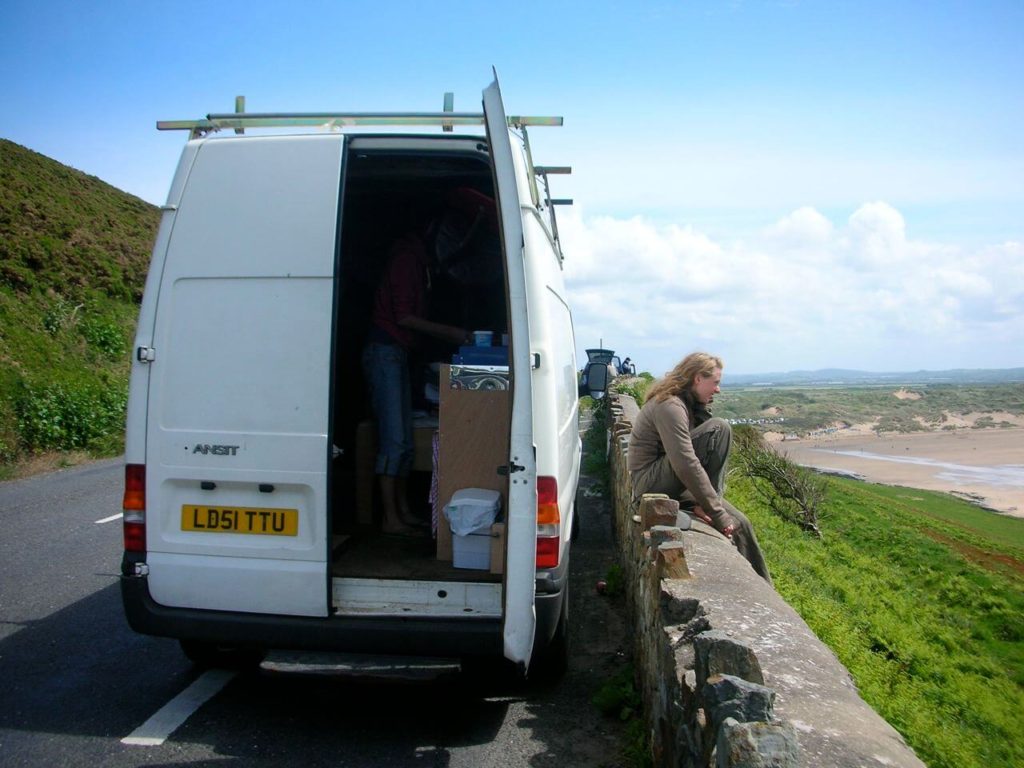 A quick pit stop by the beach with Karen & her van

My desire for my own van was set and I had even started dreaming and planning its layout. However the years rolled on vanless as the right time to buy a van never came along.

With a move to Sydney planned I felt the right time was approaching so Mark and I had a practice run with the gorgeous Ruby the campervan. There is something very awesome about being able to arrive somewhere in the rain, get set-up, put the kettle on and make a cup of tea, all without leaving the dry haven of a van! Suffice to say Ruby made a rainy week in the Lake District super pleasant and was a hit!

Ruby looking lovely against a cloudy sky in the Lake District 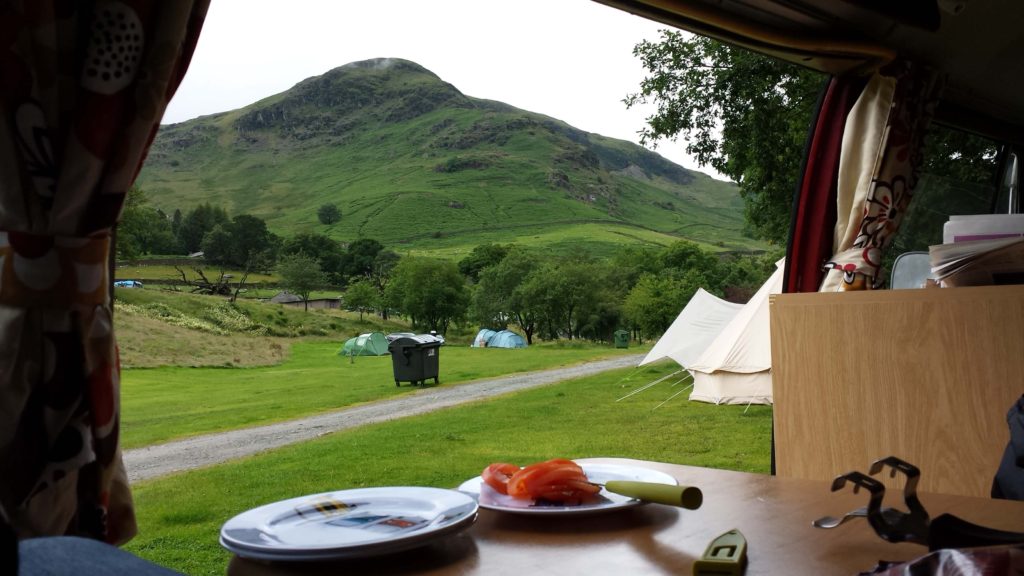 Lunch with a view!

However on arrival in Sydney I realised I had bitten off a little more than I could chew in terms of grand plans and the van grand plan/dream was put on hold once again. Then suddenly a van became a necessity!

Somewhat ambitiously I had committed to go camping once a week for a year for my birthday challenge, despite not owning a car. Around a month in after a few public transport trips and a few car share hires Mark pointed out it was time to get a van (what a legend!) and he was right, a van had suddenly become the obvious conclusion! So we added van hunting into the mix of a weekly camping trip, studying for my coaching course and the equivalent of a full-time job!

One Sunday Mark picked me up from a swimming weekend away and we set about van shopping with vengeance! That evening we found him, our van, later to become Stanley the van, aka Stan or as he is now known Stannie! He ticked almost all of our van shopping boxes though I was a little sad to not able to get a manual and that we couldn’t get the sellers super cute dog thrown in to sweeten the deal!

My first unglamorous night in Stannie!

My first night in Stannie did not live up to the glamorous #vanlife ideals! After a busy week at work and a fun weekend in Melbourne by the time Sunday night had rolled around I still hadn’t got in my camp for the week. With an early appointment the next day my motivation to go camping was about 0! With another busy week coming up, plus another camping trip to fit in that night really was my only option. Having not driven Stannie before, or a van for that matter my desire to do so, in the dark when I still wasn’t super confident in the Sydney traffic was not high!

So there began my dodgiest night of ‘camping’* for the year, a night in Stannie, on the street outside our house! No doubt the zealots among you will be thinking hang on, that’s not camping but as I had set the challenge I also set the rules! So to me, a night spent outdoors, be it in a van or a tent met the rules. Granted a night in a van on my street was stretching the rules to breaking point but I was excited to check out Stannie, and this was my dodgiest night! 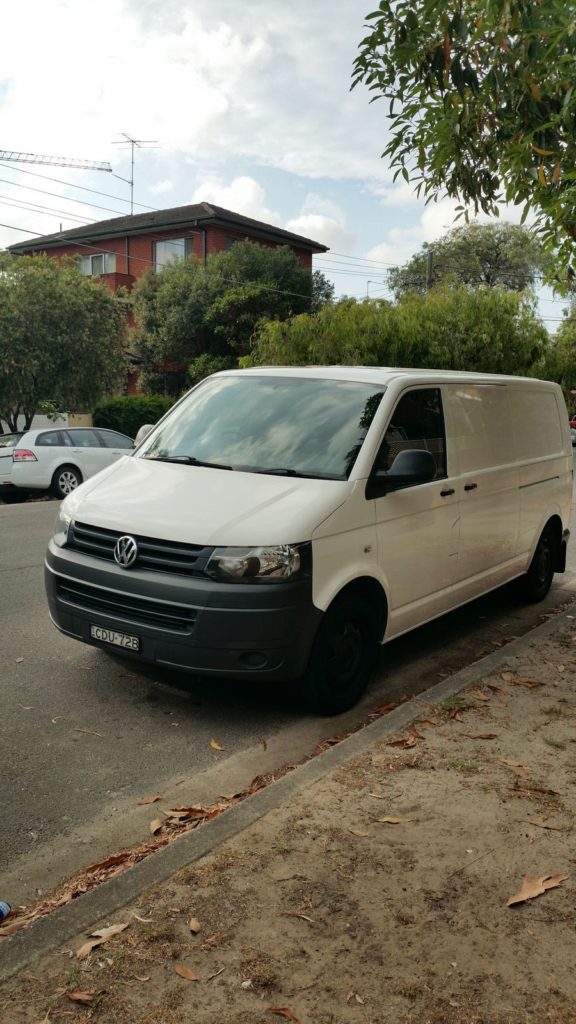 An imperfect setting for a good night’s sleep!

That night I did not sleep like a baby! I was lying on my Thermarest, on the yet to be vacuumed carpet in the back of the van (luckily the previous owner had not only carpeted his van but had also kept it fairly clean – sleeping in the van without doing any work would not have been an option for many of the vans we had viewed!). I had a towel up across the seats to block the view in through the front window and was keeping low as I wasn’t yet sure how effective the blacked out back windows were! A night of disturbed sleep ensued, if  I managed to sleep through the lights of passing cars the movement of the van as they passed sure did.

Things can only get better!

It’s fair to say that things could only get better, and I’m pleased to report that they did! Living in Sydney we are spoilt for choice with the amazing coastline and national parks on our doorstep and we have had some great trips away.

After a year of van life, I can conclude that it is as good as I ever thought it was going to be! I absolutely love the freedom of being able to jump in the van, 5 minutes after I’ve decided to leave with barely needing to pack, the ability to pull up somewhere unexpectedly beautiful and cook up breakfast or the opportunity to have a quick nap in the back when I’ve got a spare 20 minutes to kill!

To come in Stannie’s future a proper van set up including a kitchen and fold out bed (we have only put in a temporary bed so far as there simply hasn’t been time to do a proper conversion), more windows and some solar. And more importantly, some decent road trips starting with a week or so in the Kosciuszko National over the Christmas/New Year break, I can’t wait! Once you’ve got used to camping every week a 3-week stint in Sydney seems like a really long time and I’m itching to escape! 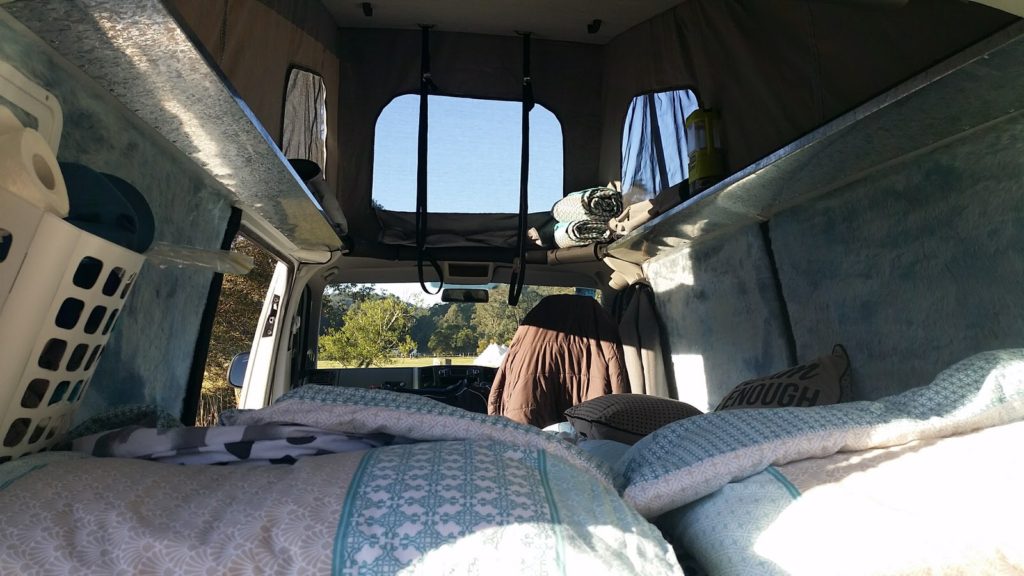 Temporary setup – for the record the fluffy blue carpet was already in place when we bought Stannie! As was the dalmatian print carpet on the door! 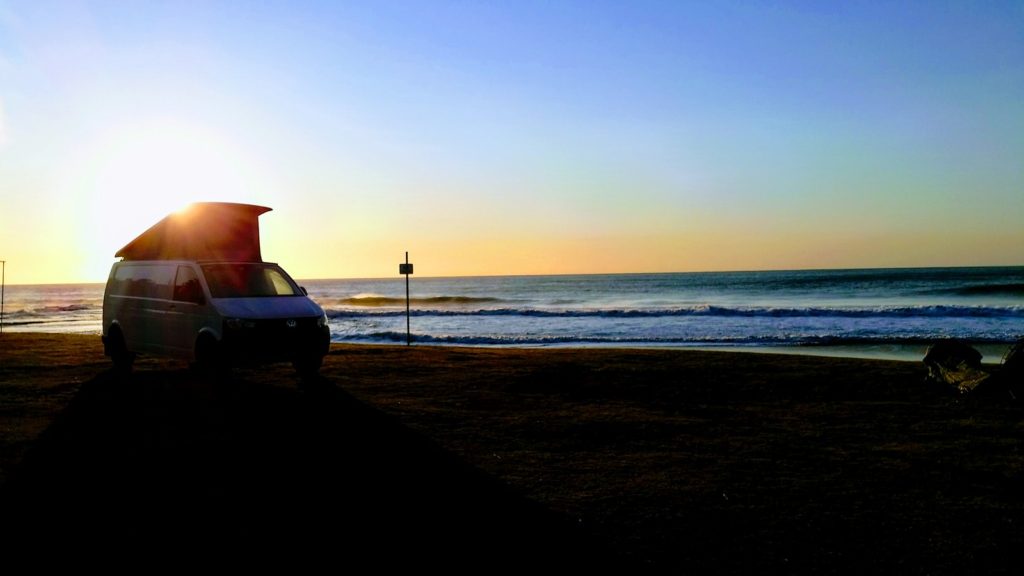 Coledale Beach Campground – the perfect setting for watching the sunrise from bed! 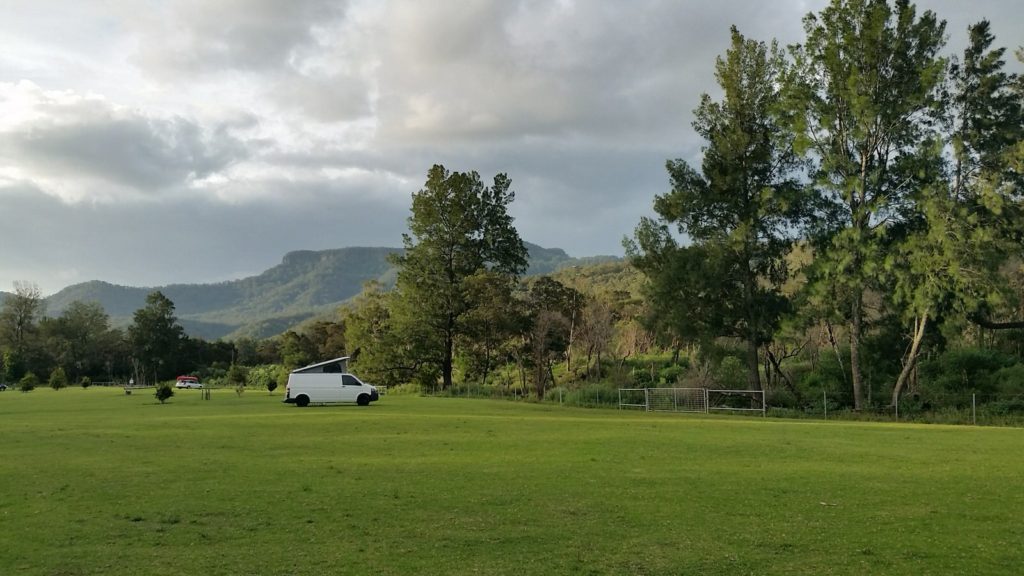 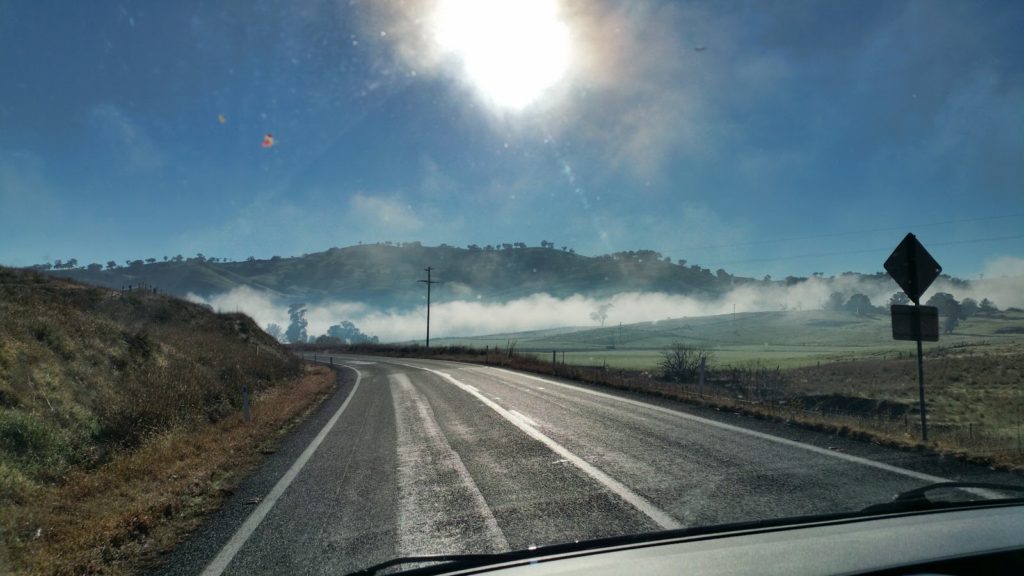