I originally wrote this blog back in April 2016. I’ve written about my swimming progress in a recent blog so have added this in to reflect how far I have come!

“Are you ok?” Matt asked I nodded, “sure?” he asked, I nodded again but I don’t think I was all that convincing! My chest was tightening making it harder and harder to swim.  We were on the far side of Coogee bay and it was my first swim with the Coobras.  Even getting to this point had been a bit of a mission, first I had been knocked down by illness for the month since my arrival in Australia and even once I was feeling better I kept on finding excuses to not quite make it to join them for a swim, despite being really keen to do so.

But finally, I had shown up, too late to make the 8.30 swim but in time for a smoothie and the next swim at 10.30. Over our drinks the chat was casual “so how far do you normally swim in the pool?” someone asked, “oh not far” I said, feeling quietly confident that I would be able to swim better then they expected me.  However, I was also feeling scared, though at this point I didn’t realise quite how scared!

“Cookie! What you doing with all that sh*t?!”  I was waiting outside the surf club, feeling nervous and clutching my stuff like a safety blanket; my hat, a long-sleeved shirt, my water bottle, and a towel wrapped tightly around my white body as I was feeling pretty self-conscious against the tanned bodies.  I was promptly dispatched to get rid of it all except my goggles in a no-nonsense fashion! 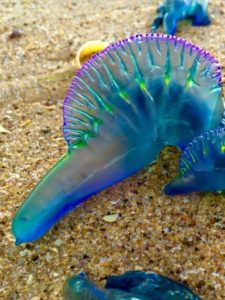 A bluebottle jellyfish – luckily I only saw small ones and nothing as colourful as this!

Walking down to the beach, avoiding the bluebottle jellyfish that were pointed out to me I was feeling nervous. A long discussion followed about where we were going to swim to best avoid the blueys. I joked about them being scared and just pretending it was all for my benefit but secretly I was incredibly grateful for their concern and the way I was being looked after (though with time I’ve learnt that they also just really love a natter!)

And then the swimming began, but not in the style that I have always adopted whilst swimming in the sea – no goggles, head up, breaststroke.  As I had confirmed with Matt before these guys were swimming front crawl or “freestyle” as they call it, head down, and not all that slow (contrary to Matt’s prior assurances!), man these folks could swim! I tried a spot of freestyle myself, after all, I could do it fine in the pool so what difference could a bit of saltwater really make? Turns out a lot and I quickly reverted back to my old familiar breaststroke!

I enjoyed the swim out, Matt darted around pointing out fish and the group were swimming with me in the centre with the idea, they would get stung rather than me! But as we got out to the far side of the bay a couple of minor waves were enough for the panic that had been sitting just below the surface to bubble up.  The swim back was a slower affair (not that the way out had been fast!), and Matt wasn’t allowed to get far away from me at all! However swim 1 was done, and so I celebrated with coffee and cake and cuddles with Elvis (the dog!) in the sunshine whilst feeling decidedly shaky. 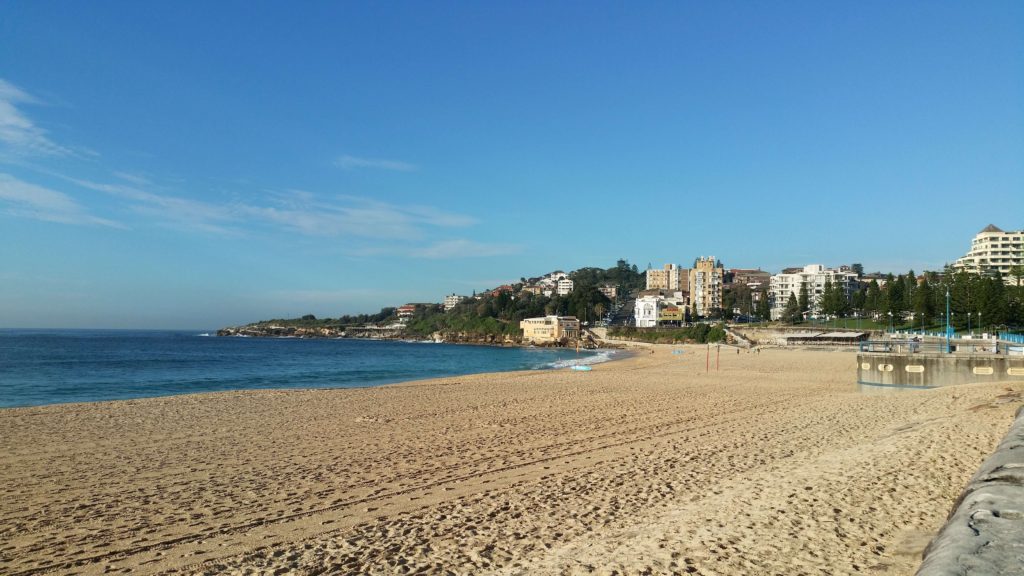 The gorgeous Coogee beach where I have been doing most of my swimming.

Swim 2 I decided not to swim with the big kids!  A lovely lady called Elizabeth was swimming along the beach so I jumped at the chance to join her.  We chatted and swam and I tried the occasional bout of freestyle, not that it ever lasted long. Elizabeth showed me the best point to get back in through the waves and I stuck close to her as we headed in, just keeping my panic at bay.  It felt wonderful, the sun was shining and we’d had a lovely swim. Feeling emboldened I joined the 10.30 crew for a second swim, once again along near the beach, this time all by myself, progress!

A few more swims followed as I committed to swimming at least every Friday, sometimes with the “big kids” and sometimes not, just having a smaller swim closer to the shore. But despite the beauty of the beach, and the silky feel of the water I have to confess it wasn’t always enjoyable.  I would be swimming along quite happily (yep, mostly breaststroke) and then boom panic would kick in.  Despite telling my brain otherwise my subconscious has a tendency to get carried away, I would feel my chest tightening and tightening so it felt harder to breathe, not at all helpful when accompanied by “breaths” of saltwater! And sometimes during my attempts to swim “freestyle”, I would have a completely involuntary reaction where my body kicked right back into breaststroke, oh how very English of me!

There’s nothing to be scared of out there!

One day as we walked along the beach heading for a post-swim coffee Matt and I were chatting, “there’s nothing to be scared of out there” he said. I nodded my head and gave a rye smile as the thoughts of things to be scared of flooded through my brain;

I realised I had some work to do! So as with anything I started my researching and found an interesting article, apparently 50% of people are scared of swimming in open water and 50% are not.  Turns out that now I’m in Australia I’m in the scared camp! But there was hope (according to the article!) as it is possible to move from the fearful to the not so fearful side of the fence.  Another article suggested swimming in the pool with my eyes closed to get used to not being able to see the bottom – I gave it a go, stroke stroke stroke crash as I hit the side of the pool! I lined myself back up and set off again, stroke stroke stroke bump as I hit the lane barrier! Hmm, as well as learning I didn’t like swimming without being able to see I had learnt I can’t swim straight, not sure how useful that was!

I began swim stroke correction classes at my gym where the instructor Jesus pushed us hard and came up with some real gems in his wonderful Spanish accent “your legs are 50% wrong [me] and your legs are 100% wrong [someone else in the class], I’m not sure which it will be harder to correct!” But every week I showed up, unlearning my swimming and trying new techniques. Wondering at the end of each session if I was even able to swim as it felt so hard to change something I had been doing for so many years. I learnt that I had an unstreamlined fondness for looking forward whilst swimming even in the safety of the pool and that I should start breathing on both sides (I had previously been a 4 stroke then breathe fan) or else I would be “wonky”!

Jesus also taught us survival stroke, “this stroke is great because you can do it with two legs and one arm, or two arms and one leg, and you can still see, so if a shark bites your arm you can still swim!” ah yes, sharks, just what I wanted to be thinking about! Just in case you ever need it survival stroke is swimming on your back, breaststroke legs and small pushes down with your arms by the way! 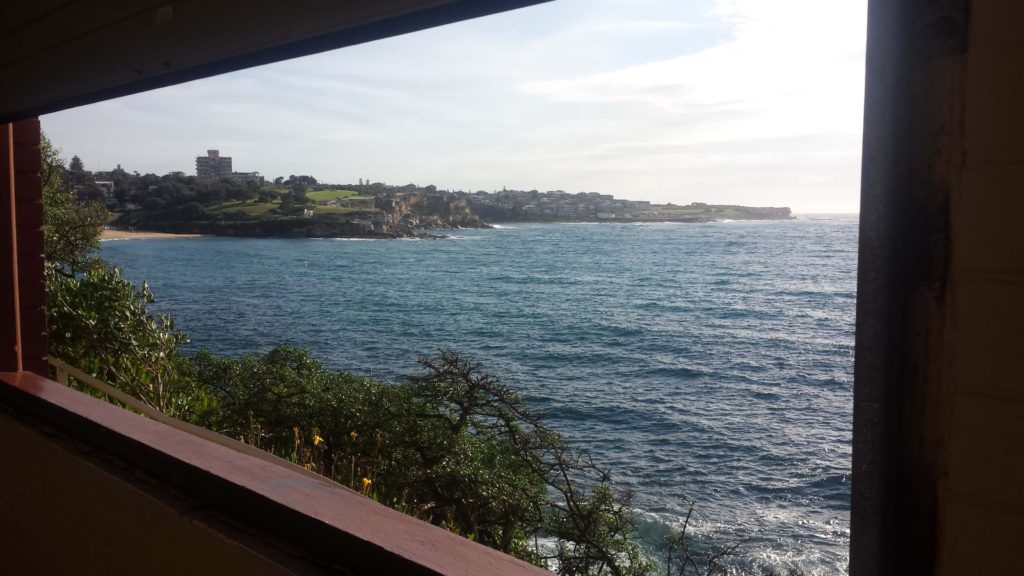 McIvers Baths: when the view from the changing room is this good you know you’re in for a treat!

Then one sunny Friday morning I headed for McIvers Baths, a gorgeous swimming bath cut into the rock just around the bay from Coogee.  With entry a mere 20 cents (thrown into a bucket!) and a ladies only policy I imagine this is how things might have been 100 years ago.

And there I had a minor breakthrough, I was able to put my head in and swim a whole lap of freestyle without panicking! The tide was low enough that the water was calm so when I turned my head to the side for a breath I got a mouthful of air, not water and the water was clear enough to see the fishes. Cute little colourful fish, though I still had a fright when I saw the first one! And then another fright, stroke stroke stroke, boobs??!  Luckily I’m not scared of them, but still, it was something I wasn’t expecting to see right in front of me when glancing up!  in this unusual ladies only world, it seemed going topless was pretty common and boobs were allowed!

And on that note, I will leave the rest of the story for another blog…! 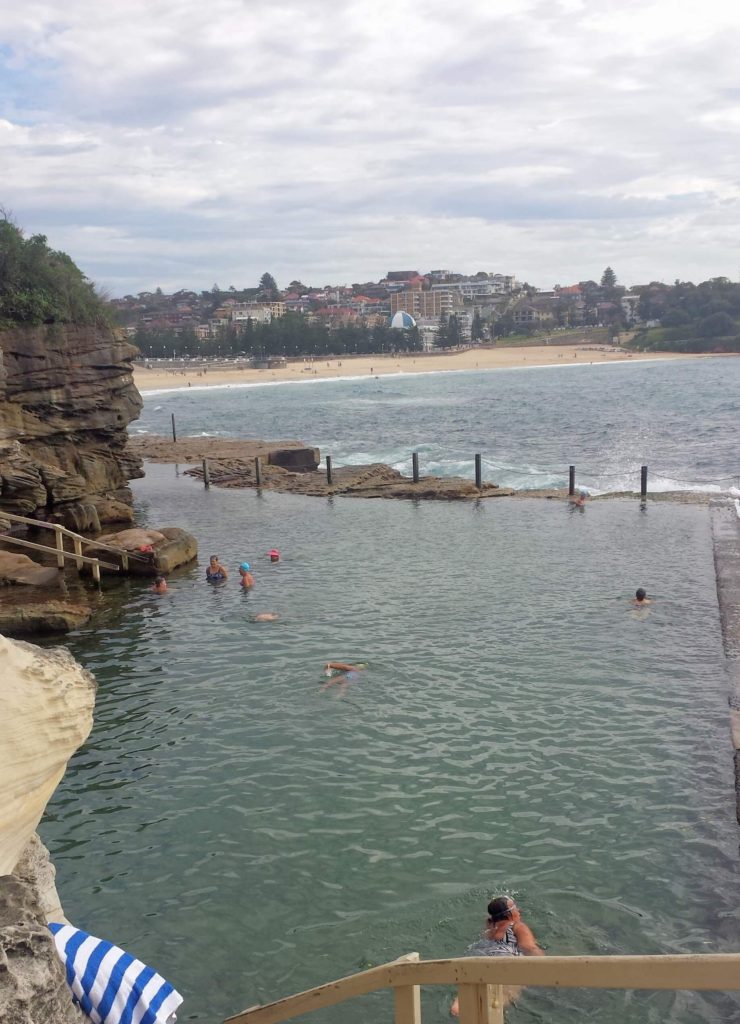 McIvers Baths: this photo was carefully taken so there were no boobs in view!